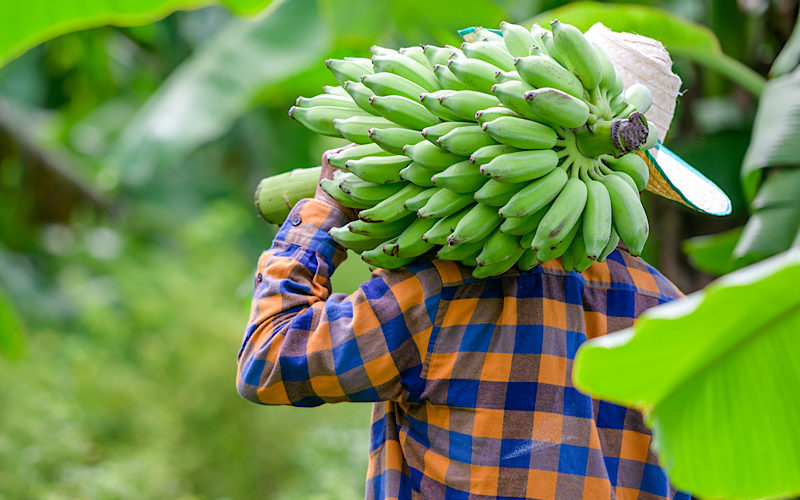 When we unpeel a humble banana, we don’t normally think of anything other than how good it tastes. But should we be giving thought to the farmers and their families who produce our bananas, and other foodstuffs for that matter?

We’d be forgiven for not really attaching quality of life to our food, especially so, plant-based products. However, life isn’t always that rosy for food producers in poorer parts of the world.

Let’s take the case of Mr Isabel Coba Mojica who was 16 years old when he first started working on a banana plantation in Panama’s Chiriquí province in 1967. He worked there for 25 years. The plantation is now known as Chiquita Brands International, which is known to many banana eaters worldwide.

At the time, Mr Coba was trying to start a family with his then girlfriend but after a few years of trying to conceive the couple parted. Sometime later, he met another partner, and they too failed to conceive.

Three years into his time at the plantation, Mr Coba underwent some medical tests, that revealed that he had a low sperm count and couldn’t naturally have children

“I couldn’t believe it. I went crazy, I didn’t think it was worth going on living. I felt sadness and loss”, he told the BBC New website. And he wasn’t the only one. Other workers reported similar problems and miscarriages.

Now, the BBC says that more than 1,100 former banana plantation workers claim that the pesticides they had to use as part of their work, have made them sterile.

The pesticide, known as di-bromochloropropane, or DBCP, sold under the brand name Fumazone and Nemagone, was sprayed onto banana trees to kill microscopic worms that destroyed crops. In the US, DBCP was banned in 1977 due to risks to human health, but shockingly, workers continued to be exposed to it as legal exports of unused stock of the chemical continued to poorer countries in Central and South America.

Another worker, Mr Martínez told the BBC that he was provided with a mask, but no boots, gloves or any other PPE

Now, workers in Panama, Costa Rica, Ecuador, Guatemala, Honduras and Nicaragua are campaigning for compensation against Chiquita and other well-known fruit companies, Dole Fruit and Del Monte as well as the pesticide manufacturers, Shell, Dow Chemical, Occidental Chemical and AMVAC.

Workers say it’s been a decades long battle, and still they have received no compensation. In fact, six workers from Nicaragua were found to have been made sterile by DBCP, but the case was overturned after the manufacturers successfully argued that the case was “marred by corruption”. Quite what side the corruption was on remains to be seen.

Doubts over the safety of DBCP have been around since the 1950s, before it even went on sale, when it was shown to cause sterility in animals. Interestingly, these studies were carried out by the manufacturers themselves and found cases of testicular atrophy and reduced sperm count. But when it went into production in 1961, no warnings were added to the label, nor warnings about the risks of handling it without protection.

So far, there hasn’t been a single successful case, despite a battle running into three decades. Lawyer Scott Hendler, who is fighting one of only two currently open cases says, “The companies are resorting to procedural matters again and again”.

“There is no question that DBCP can cause sterility. The question is whether each of these individual plaintiffs sustained sufficient exposure in their own right to be a substantial factor in causing their own infertility.”

Mr Coba, who has never had the chance to tell a judge or jury about his handling of DBCP without gloves or his infertility due to cases being thrown out of court says, heartbreakingly, “My brothers who did not work in the banana plantations have children. I see my nephews running around and sometimes I feel a sense of loss. It’s sad, it’s painful.”

If nothing else Mr Coba, we hear you.

Have you experienced issues with fertility due to pesticides? We would love to hear from you at @ivfbabble on social or email is at mystory@ivfbabble.com