Smiling with her six-week-old baby in her arms, Katie Foster is thrilled her daughter has arrived in time for Christmas – thanks to a competition she won on Facebook.

The HR manager, 37, and her husband Jon, a doctor, received a free round of IVF after they were named the winners of the contest she entered on a whim.

The couple, from Staffordshire, always knew they would need help to have a family as Dr Foster, 35, was born with a fertility condition which made conception difficult.

They were eligible for only one round of NHS-funded IVF in their area – despite official guidelines recommending couples should receive three rounds – and sadly their first attempt in 2015 was unsuccessful.

The couple paid £16,000 for a further two rounds of private IVF which eventually resulted in the birth of their first child Elijah, now two.

But although they desperately wanted another child to complete their family, they were worried about spending another £8,000 on IVF when their chances of conceiving had decreased over time.

Mrs Foster said: ‘There was a lot to consider when it came to spending the money. As we had a child now, I had gone part-time at work and we had the added costs of childcare. Our chances of conceiving were not great so we didn’t know if we could go through the heartache of trying and it not working.’ 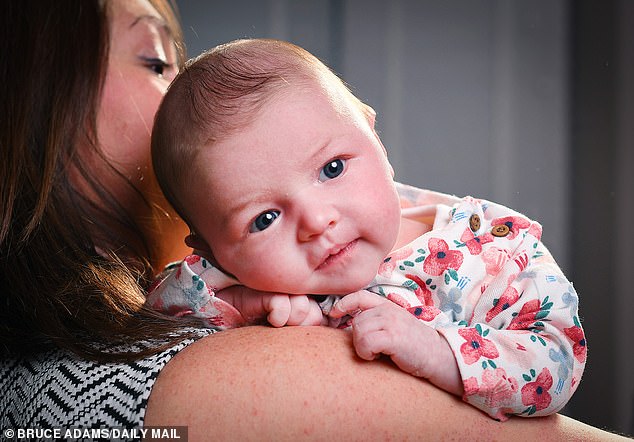 After a straightforward pregnancy, baby Abigail was born at Stafford Hospital in October weighing a healthy 8lb 5oz. She is now settling into life at home with her big brother who ‘absolutely loves’ hugging and chatting to her

But then a friend tagged her in a post promoting the competition in April 2018 which was giving away a free round of IVF and Mrs Foster entered.

The contest, being run by fertility advice website IVF Babble, was offering eight free rounds of IVF funded by the Fertility Partnership clinics in the UK to mark the 40th anniversary of the treatment.

Assuming she would not win, Mrs Foster forgot all about it until she received an email three months later, saying she had been picked from thousands of entries.

‘I thought someone must be spamming me and it couldn’t be real,’ she said. ‘I just didn’t believe it. It took a few days and the clinic phoning me to confirm before it sunk in.’

The contest, being run by fertility advice website IVF Babble, was offering eight free rounds of IVF funded by the Fertility Partnership clinics in the UK to mark the 40th anniversary of the treatment

After a straightforward pregnancy, baby Abigail was born at Stafford Hospital in October weighing a healthy 8lb 5oz.

Enjoy the festive period without over indulging!!

Men matter too, a campaign to raise awareness and support for male fertility

In the past, men have been left out of the…

FERTILITY TESTS what tests are available to you?

You may have an unresolved medical issue that is causing…

TRYING TO CONCEIVE but why is it not happening naturally

Around 1 in 6 couples around the world seek advice…

Since the launch of online fertility magazine, IVFbabble.com, back in…

We were excited to give away 15 free IVFs in…

Any cookies that may not be particularly necessary for the website to function and is used specifically to collect user personal data via analytics, ads, other embedded contents are termed as non-necessary cookies. It is mandatory to procure user consent prior to running these cookies on your website.

Get Access Here To Your Free Pre Treatment Checklist

Please enter your email address to receive the free checklist

Get Access Here To Your Free Summary Treatment Timeline

Please enter your email address to receive your free timeline