UK TV’s This Morning presenter shares her journey to parenthood and how IVFbabble.com and Lord Robert Winston helped her along the way

After welcoming her fifth child at the grand age of 54, actress Brigitte Nielsen is flying the flag for older mothers. Having recently given birth myself at the age of 46, I salute her. I suspect that she, like me, went through hell to get there.

When I announced my pregnancy on the television show This Morning back in January, speculation was rife over whether I’d had IVF.

I did. In fact, I had seven rounds.

Why hadn’t I had children earlier? Sometimes you only meet the right person late in life – I was 40 when I met my partner Paul.

Scroll down for video 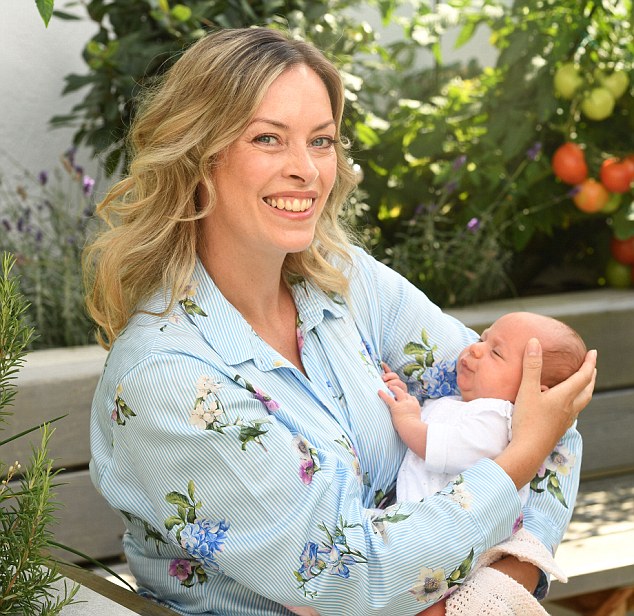 ‘When I announced my pregnancy on the television show This Morning back in January, speculation was rife over whether I’d had IVF. I did. In fact, I had seven rounds,’ said Sharon Marshall (above, with her baby girl, Betsey)

I worked hard, as a newspaper journalist, then presenting on This Morning and as a scriptwriter – but didn’t deliberately put my career before love or whatever cliches people like to throw. I always wanted to share the joy of a child with a partner, and when I found the right one, we couldn’t conceive. We had every test to find out a cause and we still don’t know why.

I endured six years of IVF, with two miscarriages along the way. Year after year I sank into despair as attempt after attempt failed.

It was just before Christmas 2017 that I finally saw what I’d been desperate for – the second blue line on the pregnancy test, a positive result – and bought 14 more just to keep telling myself it was true, I was finally pregnant.

Right up to the moment Betsey was born by planned caesarean on July 9, at just over 6 lb, I was still terrified something would go wrong.

First developed 40 years ago, in vitro fertilisation (IVF) is a method used to help couples who have fertility problems to conceive.

Eggs are removed from the woman’s ovaries and fertilised with sperm in a laboratory.

The resultant embryo is then returned to the patient’s womb, where the hope is that it will implant and grow.

IVF is indeed a miracle and I am forever grateful to the doctor who finally gave me and Paul our beautiful daughter. However, I must confess that when I went in to the process six years ago, I was pretty clueless about what it involved physically and mentally, or how much the odds were stacked against me – because of my age.

After every failed cycle, I found there was a real lack of reliable, practical information that would really have helped me: a woman in her 40s going through the process.

And since I announced I was pregnant, friends, acquaintances and members of the public have got in touch about their desperate fertility struggles. They say my story has given them hope.

That’s why I’ve decided to speak out about my journey and tell you the important lessons I learned along the way, in the hope it might help others fulfil their dream…

IT IS TOUGH, BUT POSSIBLE, IN YOUR 40s

Women aged 30 who have no fertility problems have about a 75 per cent chance of conceiving within a year. Once you reach 40, this drops to 44 per cent. Those having IVF under the age of 35 have about a 29 per cent chance of a live birth, but as soon as you reach 38 the statistics pretty much fall of a cliff, falling to an abysmal 15 per cent. It’s even worse for women aged 42 as their odds are estimated at about two per cent. But this doesn’t mean you shouldn’t try.

I’d heard stories of women who’d conceived in their 50s and knew there were plenty of new, emerging technologies. And though I worried what people would think of me being pregnant at the age of 46, I was pleasantly surprised. People are just thrilled we’ve had a baby. And I wasn’t the oldest in hospital. In fact, as I carried Betsey out, a midwife told me to wait a year before trying again. I’d be nearly 48 by then I said, but it didn’t bother her. She’d seen older. 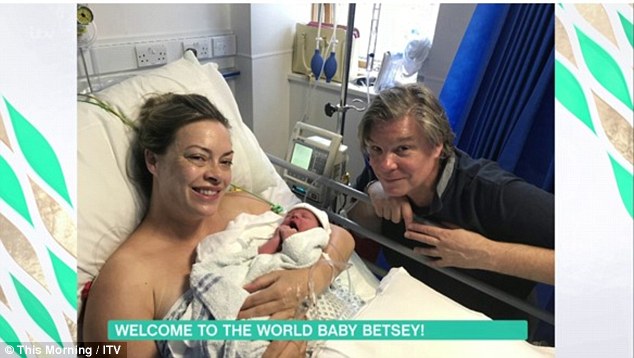 This Morning’s resident Soap Queen Sharon Marshall, 46, welcomed little Betsey earlier this year. ‘Right up to the moment Betsey was born by planned caesarean on July 9, at just over 6 lb, I was still terrified something would go wrong,’ said Sharon. (Also pictured, her partner, Paul)

HOPE TO SUCCEED BUT BE PREPARED TO FAIL

We don’t talk enough about failure rates and that’s making it harder for women.

About four years into my attempt, several thousand pounds down, and having been told that yet another cycle had failed, I found myself sobbing down the phone to the nurse who had delivered the news, asking if I was some kind of freak. Was I the ‘only one’ in the clinic who wasn’t getting pregnant? She told me no. The glossy marketing posters don’t admit it, but the vast majority of IVF cycles fail.

I know of one woman who took 25 attempts at embryo transfers before she finally had a child. If we were more honest that it often doesn’t work, women would feel less isolated and less of a failure.

BEWARE THE MARKETING HYPE OVER CLINICS

Most people choose a clinic by success rate. But beware – published success rates can be misleading. Some quote results after three cycles but this usually means multiple actual embryo transfers – when the fertilised embryo is placed into the womb – as you produce several eggs per cycle.

What you really need to know is per embryo transfer, what is the live birth rate?

Make sure you are given rates for a woman who is the same age as you with the same hormone levels.

This calculator from the Lister Clinic was the most honest I found: ivf.org.uk/about/pregnancy-calculator, to give you an idea of your chances of achieving pregnancy. Don’t be put off by a clinic that has slightly lower success rates. It may take on more complex cases that others won’t touch for fear of damaging their success rates.

We went ten times over our budget. I was determined to pay for absolutely every add-on treatment that I could get my hands on. I had to give this my absolute all. There is a controversy about fertility clinics allegedly overselling ‘add-ons’. But in my experience, doctors were always honest – they might or might not help. So do your research, listen to advice and look at what you can afford. Between my fourth and fifth treatments, I took a six-month break to recoup, rest and save up. Getting off that treadmill was the best thing I could have done. Don’t worry about time ticking away; your embryos remain the same age they were when they were first frozen even if you are a year older.

Failing hurts. Yet most clinics offer couples just one counselling session at the start. You need more – and I wish we’d done more.

It’s well documented that IVF is physically hard on the woman – but the mental side for both partners is far worse. There’s weeks of waiting on results: how many eggs have been harvested; how many embryos made; how many make it to day five, how many can be transferred, are you responding to drugs… 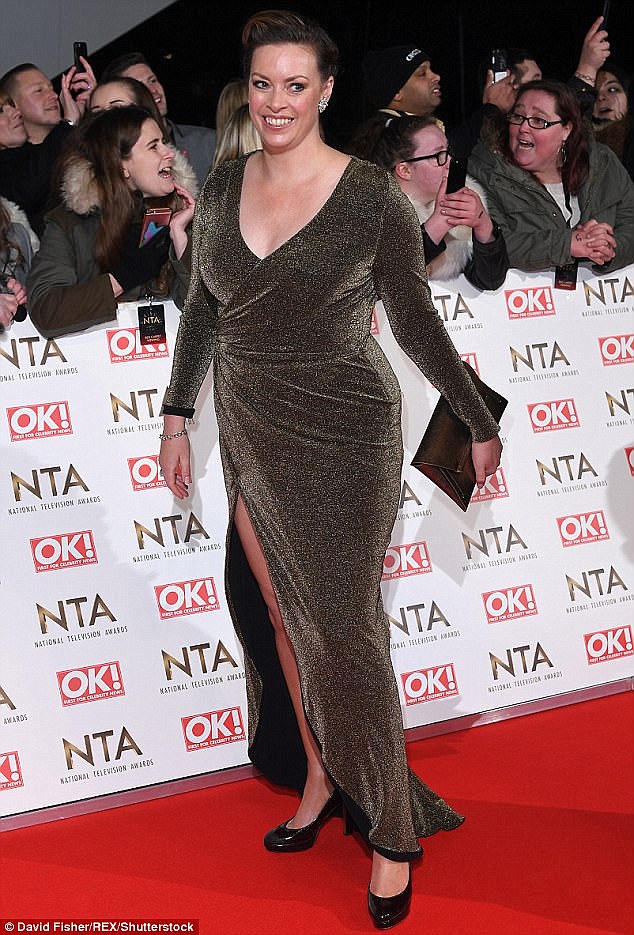 Sharon is a popular member of the This Morning team, and wore the earrings of the show’s late agony aunt Denise Robertson at the National Television Awards last January

There’s the excitement of the transfer. And then… nothing.

You wait ten agonising days, have a blood test, then a stranger rings you in the afternoon and says whether or not you’re pregnant. And if not, that’s it. Game over.

I did the whole thing in secret for years, hiding the heartbreak of every failure. I was embarrassed that I couldn’t conceive naturally. But you need to talk for your sanity. After our second miscarriage last summer and at the end of our tether, we finally told friends, who rallied round and confided their own difficulties and losses.

My final go was done with what felt like an ocean of love and support and that’s the one that finally worked.

It’s really easy to start googling and get sucked into message boards and forums about IVF and fertility. But these revealed so much pain I had to stop reading them.

Instead, I found the website ivfbabble.com a great source of information, as is the website of IVF pioneer Professor Robert Winston – robertwinston.org.uk.

My best books are on the left.

BE A PAIN IN THE NECK

At first, I injected and swallowed whatever drugs I was told to take. I felt out of control and didn’t understand half of what was being done to my body.

So become an expert. Read the books, write down everything you are doing, told and feeling. Ask questions about what you are being given and why.

Only by fully understanding the process was I able to ask informed questions and gain some sort of control over what I was doing to my body.

Having said that, I did all sorts of ‘daft’ things to try to change my luck. I got a witch to do a pregnancy spell and refused to enter clinics without my ‘lucky’ crystals in my bra. If it feels right, do it!

KNOW WHEN TO STOP

Keep going as long as you financially, physically and emotionally can. But know when to stop. After six years I was reaching the end of what I could cope with. People call it giving up, but it isn’t. It’s being strong enough to know what you can take, to give it all you’ve got, and then to be able to say no more.

We got our daughter. I know I’m lucky – and yes, I will try again.

If I’ve learned anything it’s that any woman going through this should be proud of themselves. They are warriors for having ever even tried.

What is it really like being an older mother using egg donation?

Trying to conceive is hard, really hard. We describe it…

Men matter too, a campaign to raise awareness and support for male fertility

In the past, men have been left out of the…

FERTILITY TESTS what tests are available to you?

You may have an unresolved medical issue that is causing…

TRYING TO CONCEIVE but why is it not happening naturally

Around 1 in 6 couples around the world seek advice…

Since the launch of online fertility magazine, IVFbabble.com, back in…

Any cookies that may not be particularly necessary for the website to function and is used specifically to collect user personal data via analytics, ads, other embedded contents are termed as non-necessary cookies. It is mandatory to procure user consent prior to running these cookies on your website.

Get Access Here To Your Free Pre Treatment Checklist

Please enter your email address to receive the free checklist

Get Access Here To Your Free Summary Treatment Timeline

Please enter your email address to receive your free timeline